After conceding the double to their hosts last season in their inaugural meetings, the Peacocks gained their first point against the Police with honours even at Imber Court. A draw was probably about fair although both sides had their opportunities to stake a claim for all three points had their finishing been more clinical.

With Shane White suspended, Lewis Hall stepped into the starting eleven along with Ryan Brett who was making his first league start of the season following recuperation from injury. And it was the visitors who were on top in the early exchanges, Zak Smith threading a pass through to Dan Sullivan after four minutes, but the Town striker saw his shot blocked and Andrew Neal’s follow-up took a deflection off a defender for a corner.

Smith was set up by Neal to curl an effort wide of the right-hand post as Town continued to threaten before the Blues began to feel their way into the game, Jack Mazzone seeing a header cleared by Lewis Hall and then sidefooting wide of the target following a run into the box from the impressive Kai Hamilton. The first half continued along the same lines, the home side breaking with pace and the Peacocks clearing their lines although sometimes more effectively than others. Ollie Knight’s curling cross was missed but fortunately Ayoub Assal failed to make contact in front of goal and then another Knight cross was shielded down to Luke Robertson who slanted a shot wide of the post.

An Ollie Chamberlain cross was guided wide by Neal on the volley as the Peacocks remounted their challenge towards the end of the half but frustratingly things failed to come to fruition in the final third. The Police were forced to defend a couple of dangerous Brett free kicks and when a corner was not adequately cleared, Jamie Price prodded goalwards from eight yards and Neal was unable to direct his attempt on target from close range, summing up a first 45 minutes in which both sides failed to really test the opposition keeper.

Town re-emerged for the second half in positive mood and were soon on the offensive as they tried to break the stalemate. Neal fed Chamberlain down the left, but his cross deflected off Alex Fisher to Charlie Burns who then held Ben Adelsbury’s speculative shot from just inside the Police half. Smith made a mazy run from midfield, but his final effort did not do himself justice before Town grabbed the lead after 57 minutes. Jamie Short’s cross was tipped over for a corner from which Brett delivered into the box, Ed Palmer flicked on and Neal adeptly headed over the line on the far post.

Smith had another shot which did not unduly worry Burns who gathered and then Sullivan just failed to connect with a great diagonal cross from Hall as Town looked to extend their lead. However the Police were also creating openings themselves and after an off-balance Mazzone had headed Knight’s cross over the top, the hosts drew level on 73 minutes. Mazzone broke down the left and via Hamilton and Robertson the ball reached Bilal Sayoud 15 yards out and he took a touch before steering his strike inside Irish’s left-hand post.

Neal immediately responded, latching onto Palmer’s lofted pass forward and despite the close attention of two defenders sent a strike into the side netting. It was the home side though which had their tails up following the equaliser and they came close when Sayoud’s cross was met by the unmarked Assal whose header was clutched by Irish. Robertson planted a header over from Knight’s centre before another Police raid down the left saw Knight cut the ball back to Sayoud who was denied from close range by a superb block by Hall.

Play swung from end to end as the dying minutes ticked away, Harry Kite driving into the box but seeing his cross-shot held at his post by Burns while a Knight free kick at the other end led to ping pong in the area, Irish denying Sayoud amongst the melee. Smith sadly had to be substituted for the Peacocks following a foul by Alex Fisher and Adelsbury was just unable to get his head on Brett’s ensuing free kick.

The Peacocks nearly nicked maximum points in stoppage time when Matt Wright’s flick beat Lucas Ness to find Neal in the middle, but his strike was cleared off the line by Oliver Robinson. Despite frustration at not making the most of their chances, the result made it seven league games unbeaten for the Peacocks as they now look forward to two consecutive home fixtures. 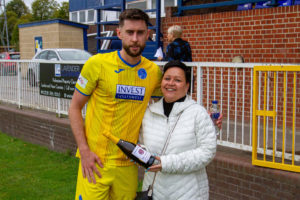 Ryan Brett being presented with his award by Chairman’s wife Kerry Sturmey.