A stirring comeback was not sufficient to prevent the Peacocks from exiting the Emirates FA Cup against their National League South opponents.

The hosts had the better of the play in the first half and created a number of chances which they were unable to convert – Jonah Ayunga could have helped himself to a hat trick with Alfie Rutherford and Bradley Tarbuck also having chances. Last season’s top scorer Andrew Neal was Taunton’s most lively forward but his opportunities also came to nothing.

Malta international Sam Magri headed wide early in the second half and it was his cross which broke the deadlock after 69 minutes when it was headed into his own net by Ben Adelsbury.

The lead was doubled after 84 minutes when a cross by substitute Danny Kedwell was turned in by Andy Drury and the hosts had a stranglehold on the match.

In injury time skipper and player of the match Shane White headed in a corner by substitute Ryan Brett.

Two minutes later Ollie Chamberlain had a shot saved by home keeper Ross Worner but Havant held on to claim a place in the next round. 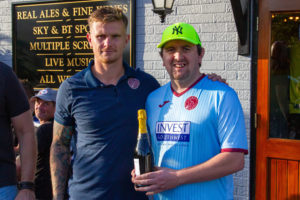 Shane White being presented with his award by Peacocks supporter Pete Taylor.