Taunton paid the price for two missed penalties when they dropped two more points at the Clayson Stadium.

Both sides were forced into early changes due to injury with Dorchester’s Kyle Egan being replaced by Antonio Diaz and Taunton’s Nick Grimes having to make way for Lewis Hall.

The Magpies took the lead after 27 minutes with a well struck free kick by Charlie Davis, but the lead lasted just four minutes as Taunton skipper Shane White set up Andrew Neal whose powerful finish was too good for home keeper Shane Murphy. Taunton had a great chance to take the lead just before half time from the penalty spot following a handball, but Neal’s kick went over the bar.

The Peacocks had two good chances at the start of the second half, but a Zak Smith shot hit the bar and Dan Sullivan just failed to reach a Lewis Hall cross. This proved costly as Tom Bath finished off a good move to put the home side ahead after 49 minutes.

The visitors hit the woodwork again after 65 minutes when a header by sub Matt Wright hit the crossbar and following a 79th minute foul on Wright which gave Taunton a second penalty Sullivan’s weak shot was comfortably saved by Murphy.

It looked as though the Peacocks would return home from Dorset empty handed but two minutes into injury time a shot which was cleared off the line was scrambled home by Jamie Price who netted his first goal since returning to the club in the summer. Unfortunately a melee resulting from the goal led to Taunton skipper Shane White being sent off, but the ten men were able to see the game out for a well-deserved point, although it could so easily have been all three. 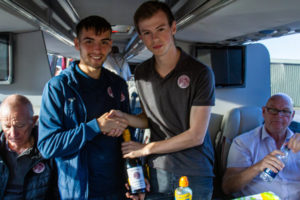 Zak Smith being presented with his award by Media Team member Dan Howell.