The Peacocks maintained ninth spot in the table with a hard-fought draw. A superb strike from Dan Sullivan gave Town the lead in a first half in which his side might have had more to show than a single goal at the break. The visitors were more prominent in the second half and by the end of the match Town had Lloyd Irish to thank for preserving a point.

A lovely warm afternoon at the Cygnet Health Care Stadium, with the “President of the USA” amongst the 539 crowd, greeted the teams and it was Supermarine who saw most of the early possession although the only real effort of note came from Brad Gray who curled a chipped shot over from just inside the box. The game awoke from its sunny slumber after 16 minutes with a goal of real quality. Shane White planted a long ball down the left to find Sullivan who chested it down onto his left foot and volleyed across Martin Horsell into the opposite corner.

This stunner seemed to be the catalyst for Town to get into their groove. Ben Adelsbury’s header was cleared, while a good move involving Andrew Neal and Sullivan saw White cross, but it was too close to Horsell who gathered. The Supermarine keeper was then off his line quickly to clear ahead of Neal but despite Town pressing with some neat approach play, the killer touch was absent, and it took a fantastic save from Irish just past the half hour mark to maintain the lead, tipping over Joe Turley’s header after the midfielder had connected with Gray’s cross.

That apart, Town’s defence dealt competently with any Swindon threat with a further goal more likely at the other end. However the Supermarine rearguard were also timely in their clearances before Horsell made a fine stop to prevent Neal from slotting in number two from White’s cross. Ed Palmer’s free kick was also smothered by Horsell as half time beckoned and then Ollie Chamberlain fired well wide after playing a 1-2 with Sullivan.

Attacking the Innovation By Design End, the Peacocks resumed promisingly, Harry Kite and Sullivan both driving wide while Neal saw another effort from White’s corner deflect the wrong side of the upright. The game was becoming ever more open though with play swinging from end to end. Soon after referee Annis had ignored what looked a definite penalty when Neal was hauled down, the visitors drew level on 63 minutes. Gray delivered a cross from the left which Stuart Fleetwood met with a downward header from six yards which beat the dive of Irish to find the corner of the net.

As Sullivan’s goal had galvanized Town earlier, the equaliser had a similar effect on Supermarine who wasted no time in looking for another. Sub Conor McDonagh’s cross flashed across goal and when Calvin Dinsley returned the ball back in, McDonagh saw his shot whistle narrowly past the far post. Irish then blocked Mat Liddiard’s close range attempt and palmed away Fleetwood’s cross but managed to recover, only to end up requiring treatment after a collision, before the Town keeper made a brilliant save to keep out Harry Williams’ far post volley from Jamie Edge’s corner.

As the game entered its final stages, Town had something of a second wind but remained out of luck in front of goal. Horsell touched over White’s teasing chip from under the bar and from the resultant Ryan Brett corner, the ball fell amongst a batch of bodies and diverted onto the post. Supermarine were also denied by the woodwork, the tricky McDonagh laying the ball across from the left and when it fell loose Dinsley fired against Irish’s left-hand post. Another late breakaway saw Dinsley shoot wide from Fleetwood’s cross as Town were the more relieved of the sides to hear the final whistle. 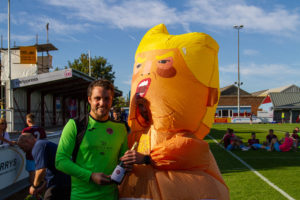 Lloyd Irish being presented with his award by ‘Donald Trump’ aka Simon Hoddinott who attended the game as part of his stag weekend.