The Peacocks negotiated a potentially tricky tie to reach the 2nd Qualifying Round of the Emirates FA Cup. Although Town struggled for fluency during a somewhat uninspiring first half, a goal just before the interval set them on their way to a dominant display for the remainder of the game to confirm safe passage.

With Nick Grimes suspended, Jamie Price returned at the back for the Peacocks after missing the previous outing to Harrow while Dan Sullivan stepped into the No 8 berth, Harry Kite being among the substitutes. The visitors were first to show, Andrew Neal having his shot turned aside by Ryan Pryce and from the resultant Shane White corner Ed Palmer volleyed wide on the near post. Unbeaten Winchester then responded with Rob Flooks heading over from Jamie Barron’s corner and a quick break which saw Olly Balmer feed the overlapping Dan Williamson who had his shot held comfortably by Lloyd Irish.

As the half progressed neither side were really able to gain the ascendancy on a bumpy pitch. The home side enjoyed ample attacking possession without really testing birthday boy Irish. Balmer received Oli Bailey’s pass but his effort was weak and easily gathered, then Balmer volleyed well wide of the target from Rob Carr’s cross before Price’s timely tackle prevented Bailey from connecting with Ollie Griggs’ cross and Williamson drove the loose ball just over.

Not much was falling for Town at the other end as the game crawled along at a slow pace. Neal made room to fire in a shot which proved an easy stop for Pryce and Matt Wright’s header was managed with equal comfort but several promising phases broke down at the crucial moment and it was the Citizens who again threatened when Palmer’s clearance ricocheted off Carr, presenting him with a chance which Irish quickly thwarted. With a minute remaining of the half, Town struck with a goal out of the blue. Palmer’s long ball downfield found Matt Wright who got goalside of former Peacock Keith Emmerson to square across the box for Sullivan to fire over the line.

The goal was the tonic Town needed as their second half performance was a vast improvement. From the outset the Peacocks menaced, Jamie Short having a shot deflected for a corner from which Price’s header dropped wide of the post. Then Neal laid off a pass for Chamberlain to drill a strike narrowly over the bar from just outside the box. The pressure paid off on the hour when Town stretched their lead, Zac Smith nicking the ball off Kieran Douglas to set Sullivan free and he kept his cool to steer home inside Pryce’s right-hand post.

Sullivan wasted no time in securing his well-deserved hat trick just three minutes later, racing onto a perfect Chamberlain pass to clip the ball past the on-rushing Pryce.

The Peacocks remained hungry to add to their tally as they pushed forward at every opportunity. Excellent work by Neal on the right gave Sullivan another opening which was snuffed out by a good challenge by Douglas, then Ryan Brett’s curling free kick was met by White’s header which Pryce tipped over from underneath the bar. Neal was out of luck again when his volley from Pierce Mitchell’s cross was again touched wide by the busy City keeper, with White heading the corner over the angle of the woodwork. The only moment of concern at the opposite end was when Irish failed to hold Barron’s loft into the box but was down quickly to prevent IK Hill capitalizing on the loose ball

After Neal had fired over and Brett had seen a shot saved, Josh Grant came close to adding a late fourth when his header from Brett’s corner grazed the top of the crossbar. The impressive Williamson then made an even later surge forward for the hosts, only to see Simba Mlambo spoon his pass over the top from six yards. Victory added a tidy £4,500 to the club coffers as the Peacocks now await their next opponents in Monday’s draw. 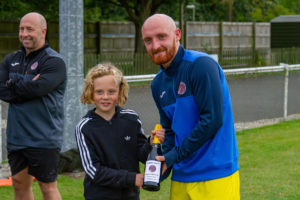 Dan Sullivan being presented with his award by young Peacocks’ supporter Ronnie Wilkins.