Town had to settle for a point in North West London after failing to make the most of a dominant first half.

With Jamie Price ruled out with a back problem, Nick Grimes made his debut at the back while Ollie Chamberlain was restored to the starting line-up and Shane White switched to left back. Early exchanges provided few chances at either end with precise football difficult on an uneven playing surface. The Harrow front line failed to test Lloyd Irish in the Town goal and apart from a few swift breaks only had a shot from George Moore from distance which went wide and an effort from the edge of the 18-yard box by Anthony O’Connor which sailed over the crossbar.

The Peacocks increasingly grew into the game and produced some excellent passages of play from midfield which threatened to breach the Harrow defence. The first real opportunity came after 27 minutes when a cross by Andrew Neal just missed the head of skipper Matt Wright. Four minutes later a Shane White free kick did find Wright’s head, but the ball went over the bar. Another shot from the effective Ollie Chamberlain went wide of the same post before the opening goal finally arrived after 39 minutes. White swung a cross in from the left and when the Harrow defence were not able to clear their lines, Grimes’ return centre was fired home from 12 yards by Ben Adelsbury for his first goal of the season.

The Peacocks were caught cold two minutes into the second half when a break down the left flank involving Lewis Cole and O’Connor saw midfielder George Moore pick up the ball on the edge of the area and slot his shot into the right-hand corner of Irish’s net to level the score. Just a minute later Ollie Chamberlain could have restored Taunton’s lead, but his shot went wide and the same player shot narrowly past the post again after 61 minutes from a cross by Zac Smith.

Harrow then enjoyed their best spell of the match – a Lewis Cole shot after 66 minutes hit the post and just two minutes later Lloyd Irish made a great double save to block Anthony O’Connor’s shot and a follow up from the same player. One minute from the end of normal time Harrow substitute Joseph Otudeko ran through, but his shot was wide.

The Peacocks’ disappointment at not sealing all three points was compounded in injury time when Grimes was shown a red card for being deemed the last man and bringing down O’Connor as he threatened to shoot from the edge of the box. Irish saved O’Connor’s subsequent free kick to preserve a hard-earned point for Town who will be frustrated on missing out on the other two. 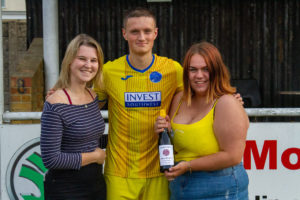 Nick Grimes being presented with his award by Peacock supporters Sophie Harris and Savannah Morris.