The first two fixtures of the campaign are increasingly becoming a distant memory after the Peacocks turned in another fine display to see off the early league leaders. Town effectively had the points won by the hour mark and although the visitors pulled one back when the pressure had eased off, they still had keeper Lewis Williams to thank for preventing further damage.

Attacking the Innovation By Design End on another warm afternoon, the Peacocks were soon into their stride. An early corner saw Ben Adelsbury hook over the top, then Lewis Hall scuffed off-target from Shane White’s cross to the back post and Jamie Price headed wide after Matt Wright had returned a cleared Adelsbury free kick into the middle.

For all Taunton’s neat approach play it was the visitors though who were first to really test the opposition keeper, George Nancekivell feeding Olaf Koszela on the left and he cut in to force Lloyd Irish to push his curling shot away. Koszela then snatched another effort wide after a fortunate rebound allowed Chris Shephard to release him.

Town were eventually rewarded for their intent with the opening goal after 27 minutes. Jamie Short, one of six former Tiverton players in the side, robbed Noah Smerdon on the right, played a sweet 1-2 with Andrew Neal and fired in a strike from the right of the box which Williams could only parry and when Michael Landricombe got in a twist trying to clear at the far post Matt Wright was on hand to ram over the line for his fourth goal in three games.

Wright nearly added his second soon after as the home side went on to dominate the rest of the half. A clearance from Williams reached him and with the keeper out of position Town’s skipper aimed for the net but Williams scampered back to recover. The let-off was short-lived though as Town extended their lead eight minutes before the break. Neal shielded the ball on the left and laid off to Harry Kite in the middle and his prod forward found White who ran on to steer a confident finish past Williams.

Town continued to threaten up until the whistle, Neal just unable to get a clear shot in after trying to make space in the box and then a lovely exchange of passes between Kite and Zac Smith saw the latter’s strike parried wide for a corner. More uncertainty from the visitors then culminated in Neal’s backheel setting up Wright whose drive took a slight deflection over the bar.

There was no respite for the Yellows when play resumed. Smith was set up by Neal but fired just over and the favour was repaid moments later when a superb Smith pass found Neal in space and his rasping shot whizzed just the wrong side of the post. The home fans did not have long to wait though for the third goal which arrived after 50 minutes. White took advantage of a Shephard slip in midfield to send Neal down the right and his ball in to the mix was steered in by Smith for his first Peacocks’ goal.

The tricky Shephard clipped a free kick over the bar and River Allen drove another shot the same way as Tiverton tried in vain to find a way back. They did reduce the arrears with a smartly taken goal after 68 minutes, Jordan Bentley crossing from the right for Jared Lewington to knock down and Steve Colwell to control and turn to fire past the despairing dive of Irish from the edge of the box.

The tempo of the game became slower in the conditions with the visitors enjoying plenty of possession but doing little with it as the Peacocks’ defence dealt with any sniff of a comeback. And in reality the scoreline should have been stretched further when Dan Sullivan put Neal in the clear but for once the reliable front man was foiled by Williams who spread himself well to block and the follow-up from Sullivan also hit a body and was kept out.

Another chance went begging five minutes later when Sullivan teed up the oncoming Ryan Brett, but Williams parried his effort and from the loose ball also clutched Sullivan’s shot at his post. In one last push Tiverton’s Jordan Dyer headed narrowly wide from Allen’s corner but another goal was more likely at the other end. Strong appeals for a penalty after Smith was taken down were waved away by the referee and spurred on by this decision, the Bristol City loanee weaved his way through the defence to drill just over the bar as the Peacocks cantered to their third win on the spin. 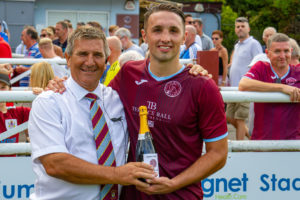