Two goals from skipper Matt Wright and a winner from debutant Harry Kite steered the Peacocks to a morale-boosting victory over unbeaten Chesham. The past week had seen Town make an uncharacteristically poor start to the season, shipping seven goals in their opening two defeats, but they steadied the ship with a much more confident and tenacious performance.

Missing the injured Pierce Mitchell and Josh Grant plus the suspended Ollie Chamberlain, the Peacocks gave debuts to loan pair Kite from Exeter City and Zac Smith from Bristol City and both did a fine job. After a quiet opening apart from a penalty shout when Wright went down and an Ed Palmer free kick from the halfway line, the visitors drew first blood after 12 minutes when Billy Adcock’s free kick from the right was hooked back into the six yard box by Mark Kirby and Eoin Casey could hardly miss as he nodded over the line.

Fears that this early setback would lead to the same outcome as the previous two games were unfounded, with Town hitting back immediately at the Invest Southwest End through Wright whose near post header crept into the opposite corner to activate the Goals For column this season. Smith was then brought down on the edge of the box, Andrew Neal touching the free kick to Palmer whose strike was deflected wide.

The game went flat for a while, Chesham making two substitutions within the opening half hour, before the Peacocks roused the vast majority of the 500 crowd with a fine goal after 34 minutes. Jamie Short played a ball infield to Jamie Price, his pass finding Neal who in turn set up Lewis Hall on the left and from his cross Wright was on hand to fire home into the roof of the net.

Much travelled striker Jefferson Louis saw his shot deflect safely to Lloyd Irish as the half ended with Town good value for their lead. They maintained their upturn in form after the interval, playing some much crisper football on the deck rather than resorting to the more direct approach. Wright’s cross was parried by Goode with Neal waiting to pounce before Neal took advantage of Kirby’s slip but fired wide of the far post.

All seemed in control with 61 minutes played before a goal out of the blue hauled the visitors level. Chesham won a throw out on the left and the Town defence failed to deal with Ryan Phillips’ long chuck into the six yard box, with Price accidentally volleying into his own net. This lucky break galvanised Chesham and they began to apply some pressure. Karl Oliyide set up Dernell Wynter whose shot was blocked on the line, leading to a bout of chaos in the box which ended with Louis blazing over. Louis then had an even better chance as Town failed to pick him up running through on the left, but he rushed his shot and Irish safely collected.

The Peacocks steadied, with Man Of The Match Smith earning a corner with a deflected shot off Kieran Murphy at the Innovation By Design End. From White’s 70th minute flag kick, Kite steered the ball over the line from close range to regain the lead for the hosts.

The Generals responded with three corners of their own, culminating in another Louis effort being easily held. Town brought on all three subs within the space of a few minutes including another debutant loanee Bradley Webb while another one of the replacements Ryan Brett had a golden opportunity to cement the win when Palmer’s shot deflected to him six yards out, but Goode stuck out a leg to deny him.

It was then Irish’s turn to shine. With time running out Louis fired in a 20 yard shot which the Town keeper touched over and with the visitors throwing everything at the Peacocks, including bringing Goode up for set pieces, Irish palmed away his opposite number’s effort after the ball fell loose to him six yards out following a long throw.

The Peacocks held firm though to secure a deserved three points and bring a smile back to the Cygnet Health Care Stadium. 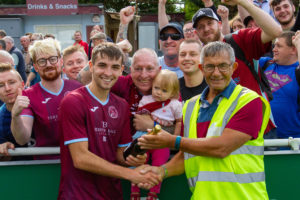 Zac Smith being presented with his award by steward Ray Pollard.