Taunton’s disappointing start to the new season continued with a lacklustre defeat at the hands of newly promoted Yate Town at the Cygnet Health Care Stadium.

They were chasing the game from as early as the first minute. Jack Twyman muscled his way down the right flank and fed the ball in field to Luke Spokes who held off defenders before clipping a left foot shot that took a significant deflection on its way to nestling in the far corner of Lloyd Irish’s net.

Spokes almost added an assist five minutes later, picking out Nick Peare with a free-kick, but the Yate captain powered his header over the bar.

Set up by Andrew Neal, Dan Sullivan looped a shot just over on the quarter hour as Taunton began to find their feet. Sullivan went even closer shortly afterwards, crashing the ball against the inside of a post following a Shane White corner from the right.

The closest Taunton got to a pre-interval equaliser was when Shane White fed Naby Diallo who in turn picked out Neal racing in at the far post, but the striker’s header just cleared the bar at the Invest SouthWest End. Matt Wright also headed White’s cross over the top while Neal saw a powerful drive fisted out by keeper Adam Forster as Town laboured to make the breakthrough.

Adam Price and Jake Lee both went close for Yate at the start of the second period. Set up by Olly Mehew, Lee saw his shot deflected behind and, from the resultant Spokes’ flag-kick, former Peacock Peare powerfully headed home the Gloucestershire side’s second eight minutes in.

Rob Dray immediately replaced Sullivan and Diallo with Josh Grant and Ryan Brett but by the hour mark his charges were three down, Spokes doubling his personal tally for the night with a peachy right-foot curler into the top corner.

The Peacocks continued to create openings without an end result. Grant was played in by Neal, but Forster blocked the shot and Lewis Hall’s header from the rebound deflected onto the top of the bar. Grant then diverted Neal’s attempt, only to see the ball tap the upright and be scrambled clear while Wright had his header from Brett’s corner kept out at the far post.

Dray made his final change bringing on Pierce Mitchell at right wing-back for centre-half Ed Palmer, pushing White into central midfield. A Brett shot, well saved by Forster, and a wayward Neal drive were all the home side could muster. Spokes forced Irish into a sprawling save before Yate completed the rout a minute from time with another fine strike, a carbon copy of their third goal, by James Ollis who had only just come off the bench just a minute earlier. 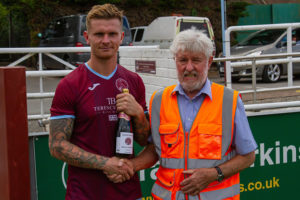