Two goals in ten minutes leading up to half time helped propel the Peacocks to a competent win over their mid-table visitors. After their previous result at Yate, the most important aim for Town was to get the three points which they achieved with room to spare as they recorded their first league double of the campaign.

Dan Sullivan was restored to the team after his one game suspension while Nick Grimes returned at the back, with Ryley Towler moving into midfield. After a minutes’ silence for stalwart Taunton supporter Dennis Hill who had sadly passed away during the week, Town enjoyed all the early possession as they attacked the Innovation By Design End on a sunny but chilly afternoon. Lewis Hall saw a cross caught on his line by Magpies keeper Cameron Plain, then the Town left back volleyed wide after Andrew Neal’s delivery into the six yard box had been cleared.

The best opportunity for an early breakthrough came when Plain was unable to hold Sullivan’s cross from the right but Ryan Brett’s close range attempt to capitalize saw the ball deflect off Plain’s face for a corner. Sullivan also saw a hooked shot safely gathered before Wimborne had their first pot at goal when Luke Burbidge collected a clearance and had his angled shot held at the post by Lloyd Irish. Antonio Diaz then fired comfortably wide but in the main it was Taunton who certainly looked the most likely to break the deadlock which finally happened on 36 minutes, Brett clipping a ball over the top for Sullivan to run on and drive low past Plain from the edge of the box.

Patient approach play saw Town nearly double their lead, Ollie Chamberlain eventually setting up Jamie Short to power through, but his shot smacked into the side netting. However the Peacocks did manage to add a second before the break. With the 45 minutes up, Brett swung in a free kick from the right side, Grimes got his head on it for the ball to fall amongst a group of players and when it squirmed loose Neal was there to steer it over the line for his 15th League goal of the season and 21st in all competitions.

The visitors began to enjoy more attacking possession after the interval. Half time substitute James Stokoe put Burbidge in space, but his shot was blasted over, then when a free kick was not cleared, Sam Davidson’s overhead kick back into the area reached Joe Byrne who turned to volley onto the top of the crossbar. Town responded when Grimes put Brett free down the right and from his cross Neal drilled just the wrong side of the post. It was the Magpies though who were enjoying most of the openings. Irish came to his side’s rescue when he turned aside Fatah Makhloufi’s venomous shot from the left, then he smothered Curtis Young’s 18 yard strike after Burbidge’s effort had been deflected to him.

Towler and Sullivan had shots blocked while Hall’s cross from the left was just missed by Brett at the far post as Town probed for a decisive third at the Invest Southwest End which came with ten minutes remaining. Neal got away down the right and his cross was perfect for Chamberlain to rifle home from close range. Substitute Harry Kite then did well to cut the ball back to Brett whose first touch was a tad too heavy and Plain snaffled to prevent a shot.

Irish made another fine stop in added time to deny Wimborne a consolation, getting down low to tip Byrne’s header from Young’s cross onto a post before being cleared to safety, securing Town’s first clean sheet in seven games but more importantly a confidence-boosting win to set themselves up for the next challenge at league leaders Chesham United next weekend. 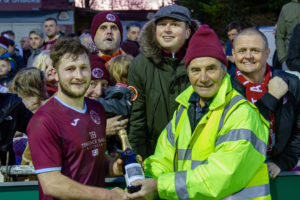